3D with WebGL and three.js

As a developer, you have surely wondered if the web can do full 3D beyond tweaking the z-index and fiddling with CSS 3D transforms. WebGL is the API for making such fully customizable visualizations in all dimensions. We can use this together with de facto standard framework three.js to unlock this mysterious domain.

Let us make a red christmas cube that reacts to our interaction. All the actual running code can be found in our repository. But don't worry, I will show what it looks like here.

Boil up some boilerplate

The best reason to use three.js is to avoid the obscene amount of boiler plate needed to get something on the screen with WebGL. But, some setup code is still needed.

We start with a renderer that will make the image on the screen:

The screen is of course a web site, and the image will actually be a canvas-element. So we append this to the DOM:

Then we need to make a camera that will represent the view angle and perspective of what we are looking at. Doing that, we need to specify the height-to-width aspect of the screen:

The fov is the field-of-view in degrees. All you gamers out there know that it can be very important!

Then we make a scene, which is going to hold all the stuff to be shown on the screen; like red christmas cubes and other things:

Now we render our empty scene and get a look at the nothingness there:

Making something from nothing

As developers, our joy is to make something from nothing. We are going to add a cube to our scene, and then make it pop. In 3D, things consist of the geometry defining their shape (like polygons!) and the material defining their looks (like textures!).

Then we make a red material to slap on it:

These two ingredients are then mixed to make the actual box. It is called a Mesh in three.js:

I promised you that the scene was going to hold all the stuff. And I intend to keep that promise, so we add our fresh box to the scene:

Does it work? Can we see it now?

Why? Because there is no light. The last piece of the boiler plate puzzle. three.js use these as representations of the light sources, and for our example it is absolutely necessary. Let us make a white light that points down slightly slanted on our box:

It is beautiful! Look at those tight corners: 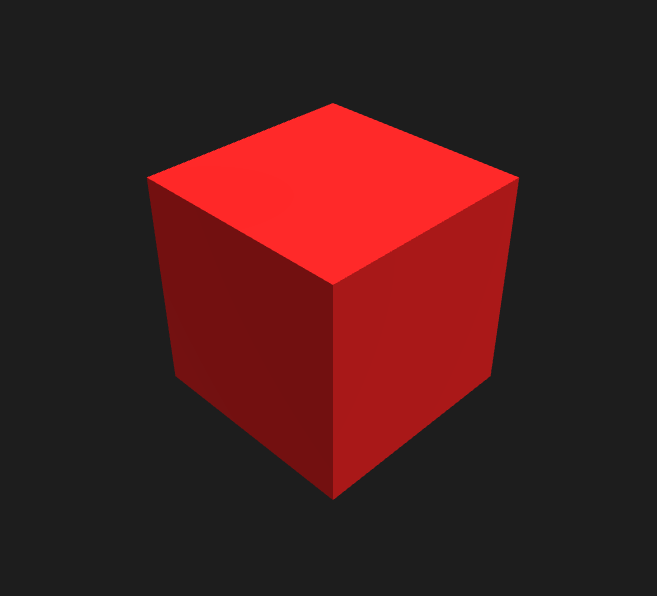 Now that we have full frontal 3D on the web, we are of course going to animate it, right?

Animations are simply many, many renders in a row. Like a stop motion movie. We wrap our render call in a function that requests to be run again and again as fast as the browser can manage:

We are going to make the cube shake when we click on it. There are many ways to do animation. But a solid tip from me to you is to define a value animationTime that is supposed to go from 0.0 (start of animation) to 1.0 (end of animation):

Now we can use animationTime to calculate the cube shake (brand new sentence!). To rotate something, we simply change the values of the field .rotation. It is a 3 part vector with the object's rotation around the X, Y and Z axis:

We are going to model our shaking on the mathematical sine wave. Because all beautiful things are sine waves, that is an undisputed fact. Sine waves have frequency and amplitude:

And if we use animationTime cleverly, we can start with strong shaking, and then cool down to a chill:

Check out those moves:

You find all the working code in our repository. You can also play around in the sandbox below:

Visit the blogs of Christmas past